How Does Lost Wax Casting Work?

Bronze is a very versatile material, with a lot of advantages over wood, stone, ivory and other traditional crafting materials – that’s why it conquered any culture that discovered it, in a series of cultural Bronze Ages!

One of the main factors in that versatility is that bronze can be melted in a furnace, and poured as a liquid into moulds, allowing enormous freedom in shaping the metal. Early artisans quickly figured out that wax made for a perfect sculpting material, and that they could use it to create a much more intricate works than they could otherwise achieve.

At Molten Bronze, we can teach you to recreate this ancient skill for yourself with period-appropriate skills and materials, on a four-day residential course that’s full of Bronze-Age knowledge, experiences and secrets. Accommodation and food are provided, so all you need to bring is the enthusiasm to learn a new (very old) skill!

For thousands of years before the discovery of iron, peoples in Europe, Asia and Africa made reference to using beeswax in metalwork, moulding and carving it into intricate shapes and then swapping it out for bronze. 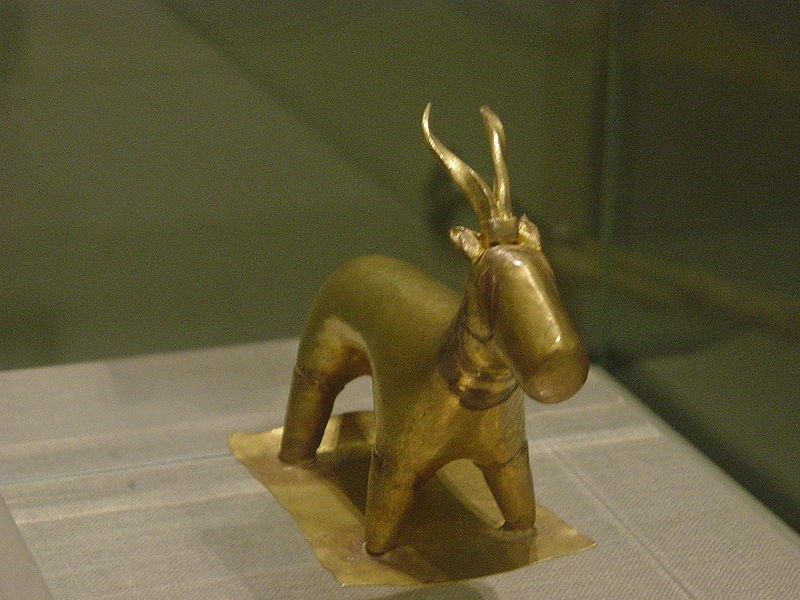 A late Cycladic 17th-Century BC statue of an ibex, made with lost-wax casting in Santorini

Lost-Wax Casting requires several steps, beginning with beeswax and ending with a bronze sculpture – and here’s how it can be done!

First, beeswax is moulded and carved into the desired shape. This can be anything you’d like – and bronze-age craftsmen often created incredibly detailed and intricate shapes, like those seen on the Chinese jin pictured below.

The wax would usually be moulded by hand, and carved with a small knife or appropriately-shaped wooden tool. It’s soft and easy to work, so this wouldn’t be too hard for the craftsman to accomplish!

Once it’s been shaped, the wax is sprued with additional wax channels, which usually look like cones poking into the model – these will allow the bronze to be poured in to the mould cleanly.

The wax model is then coated in material to make a mould. Modern craftsmen use silica solutions and spray-on crystalline mould materials, but back in the old days, bronze crafters used clay slurries, mixtures of animal manure and straw, or fine mud to make their moulds. Sometimes, moulds of non-heat-resistant materials like animal dung would be used to create an impression of the wax, and then the wax would be melted out and replaced with a hardier material, just for the process to begin all over again with a tougher, more heat-resistant mould material until they got to one that could survive bronze casting. It all depended on what was available to the local smiths – royal craftsmen in empires like the Hittites or Etruscans would have had access to much more exotic crafting materials than Celtic tribesmen would have!

Once the mould is made, it is placed into the furnace upside-down, allowing the wax to melt and run out and, in the case of ceramic mould materials, also firing the mould. The mould is usually encased in more clay after it cools, to help prevent it from shattering while the bronze is being poured into it.

Now, the main event! Copper and tin are heated in a crucible within the furnace, mixing to create bronze. Bronze-age smiths would also have used lead and arsenic instead of tin, but modern smiths normally don’t because of how harmful those substances are (and because they make sub-par bronze… but mostly because they’re very poisonous).

The mould is also heated, to bring it up to bronze-casting temperature – otherwise it will shatter when the molten bronze is poured in.

Once everything’s ready, the bronze can be poured in through the holes left by the sprue, and left to cool. The hard part is done, and the smith can relax for a moment!

Once the mould is broken off the casting, the sprue can be cut off, and any rough edges sanded down. The model can then be sanded, polished, finished up and admired!

Were People Really Capable of Lost-Wax Casting in the Bronze Age?

As the picture below shows, lost-wax casting can be used to make incredibly detailed objects, and it was a skill that Bronze-Age artisans were familiar with. Artefacts from the Bronze Age frequently show signs of being made this way, and in some cultures, like China, this technique was even used to make the intricate moving parts for machines like crossbows! 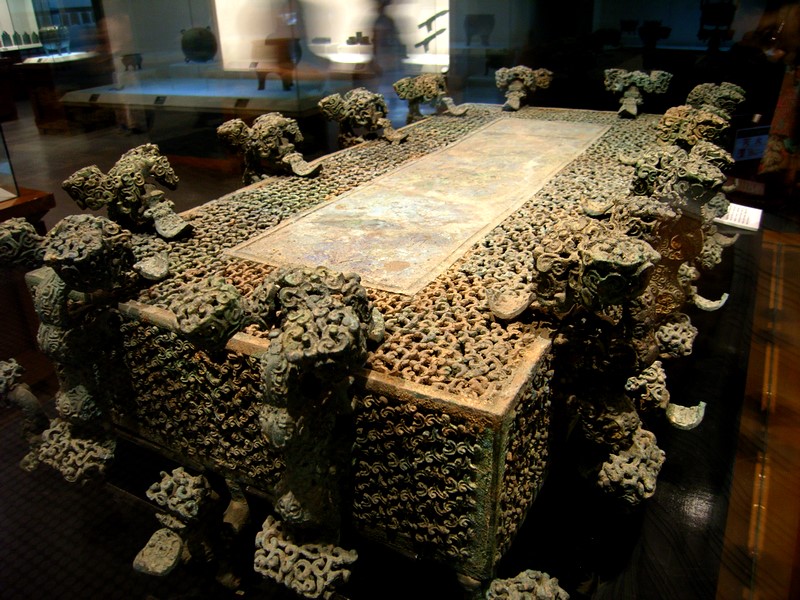 Want to Try Lost Wax Casting for Yourself? Give it a go at Molten Bronze!

If you want to give lost wax casting a shot, then our Lost Wax Casting experience will be perfect for you! Situated in the picturesque Welsh countryside, with food and accommodation included, this four-day course will teach you everything you want to know about bronze-age crafting techniques, and you’ll leave with a completely unique casting made with your own two hands. Contact Molten Bronze on our Contact Page or drop Dave an email on dave@bronzeagefoundry.com to find out more – he’ll be happy to help you set up your own bronze age experience!